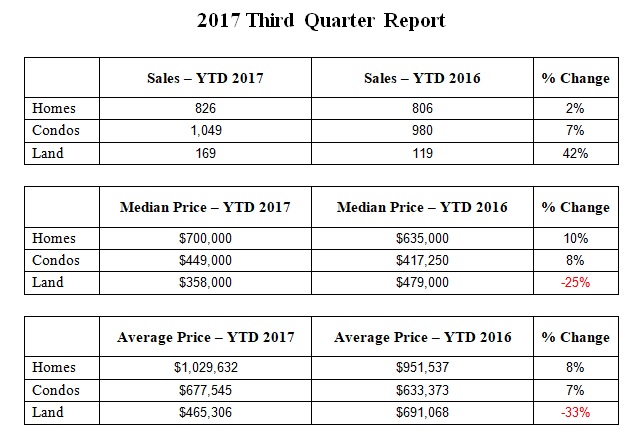 Is the Maui market Cooling off?

Numbers for year over year are up, but what are the trends showing?

The biggest concern we hear from Realtors around the country and on Maui is the shortage of inventory. Inventory levels for both homes and condos rose from the beginning of 2017 and peaked when entering the 2 quarter. In the 3rd quarter, from July to the end of September, inventories declined back to 2016 levels for homes and even a bit lower for condos.

Home sales are up 2% compared to the same period in 2016. However, sales were flat in Q-3 compared to Q-2.  With inventory levels declining, especially in the more affordable to even current average price range, don’t be surprised to see the rate of sales cool off just a bit.

Condo sales and the average selling price are both up 7%. It’s been a healthy year for people buying, and especially those selling condos, for the most part. Condo sales have maintained their level of sales in the third quarter. As we head into the traditionally slower 4th quarter, we could also see some slowing in condo sales.

Are we at the top of the market? I don’t think so. Demand, especially for homes, is very high, and interest rates are still very low. So, if you’ve been thinking about selling, there is no time like the present.

If you are considering buying, get prequalified if you are getting a loan, and once you find a property – don’t dawdle, make your move. If you like it, so will someone else, and in this market it will be gone.

Condo sales are up and the trend looks strong

But some districts are very slow

It’s been a strong year for condos. There were over 100 sales in every month except January.

It’s been a good market for sellers and buyers. Even though prices are up 7% on the year, selling prices in the third quarter were off compared to the second quarter and even the first. Additionally, there is almost exactly 6 months of inventory. That indicates a very balanced and fair market.

With almost 300 condos under contract right now, we may not see the numbers fall off before the end of the year after all. And if listings pick up, 2018 could get off to a very strong start.

Although there has been strong growth this year, not all areas have prospered. So, let’s start with the good news.

South Maui has been rocking. Wailea/Makena has exploded. The number of sales is up 33% and the average selling price is up 25%.

Kihei is up 11% on the year. However, a lot of that came in the first half of the year, and sales have slowed during the 3rd quarter. Selling prices in Kihei are up 12% for both median and average.

Maui’s West Side is an entirely different story.

On the center stretch of West Maui, “Condo Row,” from Kaanapali up the coast through Napili, sales have been paltry. In Kaanapali, sales for the year are off by 33% and the median selling price has dropped 12%.

The Napili/Kahana/Honokowai district is down 9%. However, prices have held steady, up just 2%.

In Kaanapali, the decline in sales can most likely be attributed to, you called it, lack of inventory. At the huge 600+ unit complex Honua Kai, there are a mere 13 listings. Other large complexes like Kaanapali Shores and the Whaler also have scant inventory with only 11 and 6 listings respectively. Each of these properties has only 25% - 33% of what we typically think of as “normal” inventory.

At the northern and southern ends of the West Side, Kapalua and Lahaina, the situation is better.

In Kapalua, sales are way up, a whopping 58%! And guess what? They’ve got inventory, lots and lots of inventory. In fact, at the current rate of sales there is enough inventory in Kapalua to last over 15 months. Add to that a slight decline in the median price, down 1%, and it is clearly a buyers’ market.

Lahaina is right in line with the rest of Maui. Sales are up a healthy 7%. So, that’s good for sellers. The median price is unchanged compared to the same period in 2016. So, that’s good for buyers. Lahaina has less than 4 months of inventory, so maybe the edge goes slightly to the seller right now.

The other main areas with significant condo sales are Maalaea and Maui’s Central District.

Maalaea has been rediscovered. Sales in Maalaea are up 43% on the year. That is due in part to its buyer friendly price point, a median selling price of only $405,000. But Maalaea is also a terrific location close to Kihei, Lahaina and the airport, and much less crowded than other spots.

The Central District has taken off in the 3rd quarter. Sales are now up 19% on the year compared to being up just 7% through the first 6 months. Even though inventory is very low in the Central area, a median price point of less than $300,000 and some new inventory are making it a very hot and competitive market.

But, that only tells half the story

However, there are 2 critical factors that could disrupt that smooth sailing: higher selling prices, the median is up 10% on the year, and steadily declining inventory.

At the current rate of sales we have enough homes on the market to last just over 5 months.  That indicates a fairly balanced market. However, there is less than 3 months of inventory of homes at a price point that won’t require a jumbo loan.
With 248 homes currently under contract, we could see steady sales continue through the end of the year. However, without new inventory, sales cannot be sustained.

On the other hand, if you are shopping in the $2,000,000 + range, Maui is your oyster. We have enough inventory for almost a year and a half.

Everyone always wants to know “where can I get a deal?” Well, the deals, relatively speaking, are in Wailea and Kapalua.

Kapalua may offer the best opportunity for deal hunting on the island. There have only 6 transactions there this whole year, less than one per month. They have 24 active listings and median selling prices are down 8%.

In Wailea, at least the number of transactions is up. In fact, they are up 22% over last year. However, selling prices are off by 18%, down to a median selling price of only $2.8 million.

Still the most affordable district and the area with the most sales is Maui’s Central District (Wailuku/Kahului).

With 262 sales this year, they have more than double the sales of 2nd place Kihei. Also, with a median selling price of $607,000 for the year, it is one of the few places on the island where everyday people might be able to qualify for a mortgage. And with prices up 10% on the year we may be seeing affordability fading there as well.

Maui’s West Side is a mixed bag. As previously noted, Kapalua sales are off by 45%. However, in Kaanapali sales are up 20%. Two keys to Kaanapali’s success are lots of inventory and prices are absolutely flat.

In Lahaina, sales are off 6%, but selling prices are up 73%. The current median selling price for a “Lahaina” home is $1,334,500. The reason for the quotes on “Lahaina” is that over a third of the sales were in the upscale ag area known as Launiupoko, including a couple in the $4M range.

The popular Kahana/Napili area is up a shocking 26%. It is shocking because that was one of the hottest west side areas in 2016. Equally shocking is that the median price has hardly moved. It is up just 1%.

Kihei has had the second most sales of any district on Maui through the first 9 months with 122. That is just 1 sale below this time last year. However, the median selling price in Kihei is up 20% to $748,000.

Makawao remained flat through the 3rd quarter. The median selling price is still $627,500. So the slowing price trend may be good for buyers, but that is still a 10% increase over 2016.  Still, Makawao offers good value.

The star of upcountry, Kula, has performed like a star. Famous for its cooler temps and stunning views, Kula sales are up 31% with median prices on the year up 17%.

So, how is the market?  At the lower end of the market with something akin to many mainland price points, it’s hot and it’s a seller’s market.  At the Maui middle and upper end, supply and demand are firmly in play.

The numbers indicate that the overall market is strong. If you are buying in the lower to mid-market range, you should have your financing lined up and don’t try to lowball the price. You will lose that house.

If you are selling in the upper end you need to do what you can to make your house look more attractive than other homes in the neighborhood. And you may want to sharpen your pencil if you really want to sell.

Subscribe to the Maui Real Estate Advisor by sending an email to info@AlohaGroupMaui.com.

Aloha Group Maui is a part of KW Island Living, the Keller Williams Maui franchise. We can help you buy or sell a home or condo - for you to live in full time, part time or as an investment. Learn more about Maui Real Estate in our Maui Real Estate 101 resources section.